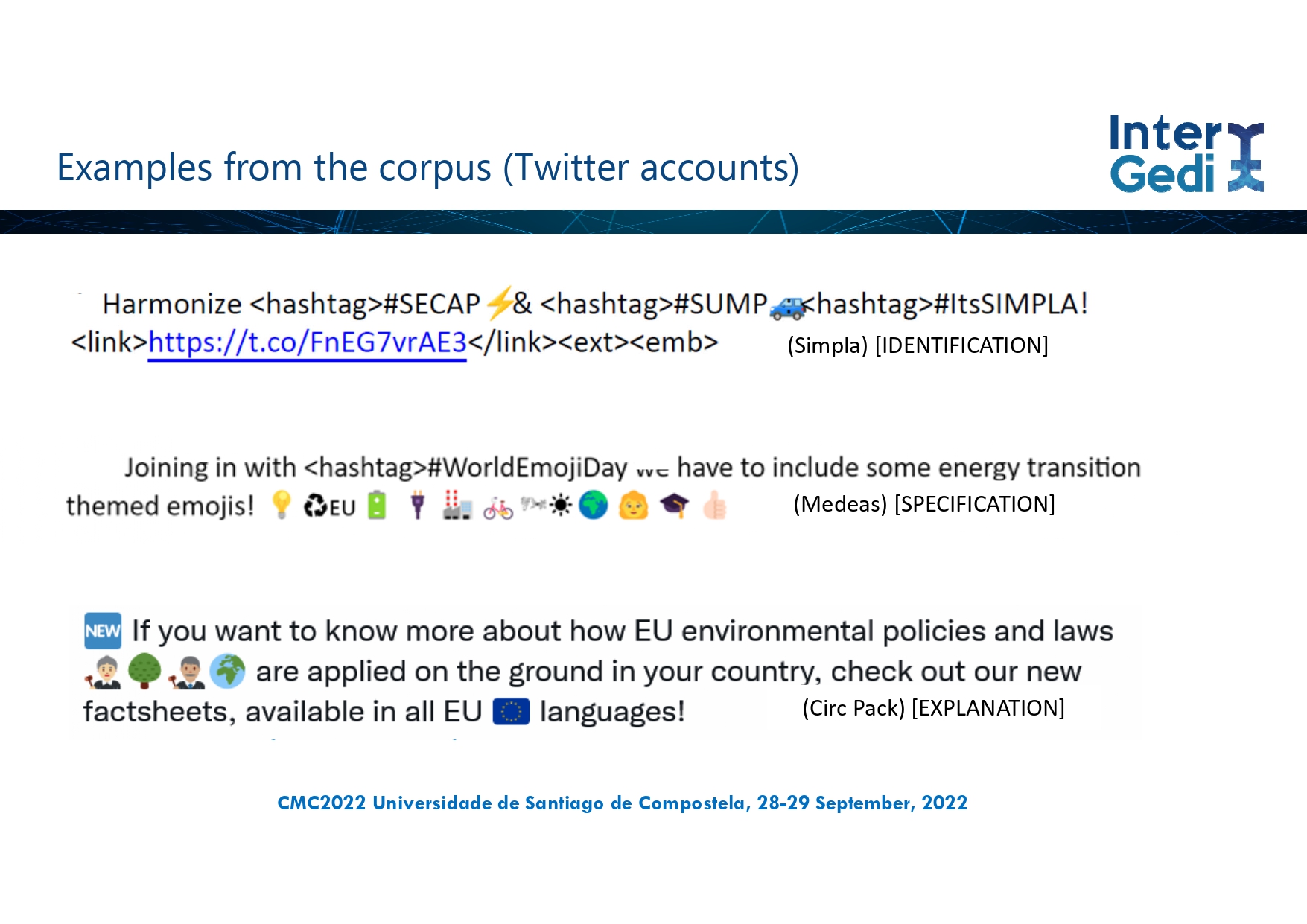 Silvia Murillo is another member of our team that presented at the 9th Conference on Computer-Mediated Communication (CMC) and Social Media Corpora at the University of Santiago de Compostela during the days 28th and 29th September 2022. The main purpose of her paper was to explore the reformulation processes in different websites and Twitter accounts from the H2020 corpus, and study the extent to which they change in the new digital media. For this, Silvia considers the affordances of these media, their potential audience and their main functions, and she argues that they are not purely reformulative, but that they also involve modal and interactive elements.

The full abstract of Silvia Murillo’s talk can be consulted as follows:

In today’s research world, international project websites have become an important way to disseminate and promote the output of research, in order to achieve visibility and social accountability. Some of these websites have associated Twitter accounts which are used to amplify such visibility and to try to reach out more directly to those followers who may be interested in the projects, a practice that has been referred to as Twitter for Research Dissemination Purposes (Pascual and Mur 2022). The potential audience for these digital media is diversified, including scholars, stakeholders and the general public.

Reformulation processes are frequent in academic genres such as research papers. They are introduced by markers such as that is, in other words, namely and i.e., and are used mainly to clarify previous ideas or formulations (Murillo 2012). In the metadiscourse framework these elements are labelled as code glosses. As the writer has to take into account the readers’ needs and background knowledge into account, code glosses may constitute a projection ofthe writer’s image of the potential readers (Hyland 2007: 284).

The aim of this paper is to explore reformulation processes in H2020 websites and twitter accounts and see how these processes adapt to the affordances and to the restrictions that these digital media entail, and at the same time contribute to some oftheir main purposes. The corpus is made up of ten H2020 websites and ten twitter accounts from the EUROPRO corpus, compiled at the University of Zaragoza (Pascual, Mur-Dueñas and Lorés 2020). The data will be processed with NVivo and both qualitative accounts and quantitative results will be offered.

In contrast to the research articles, where there were plenty of reformulations introduced by markers (Murillo 2012), in the websites there are frequent parenthetical definitions or denominations without discourse markers, probably due to restrictions of space and (reading) time. Reformulation processes are also frequently used with acronyms. An interesting use is the development of new acronyms, which could be accounted for as self-branding devices (Murillo 2021a). Following Mur-Dueñas’s account (2019) of the aims of these websites, the reformulation processes on the websites serve mainly dissemination and promotion purposes.

Regarding the twitter accounts, the most representative cases are those in which some content is translated into emoji, or the other way round, emoji are used first and then explained. In this paper I explore the different patterns that appear in the corpus, and, drawing on previous research on the (non-reformulative) modal uses of reformulation markers (cf. Murillo 2021b) and on the functions of emoji (Yus 2019), I argue that these processes are not purely reformulative, but involve some sort of modal and interactive elements. These new uses would portray the function of interaction and dialogicity with readers (cf. Pascual and Mur 2022).

All in all, in this paper I intend to explore to what extent the discourse processes of reformulation may change in the new digital media, taking into account the affordances of these media, their potential audience, and their main functions.