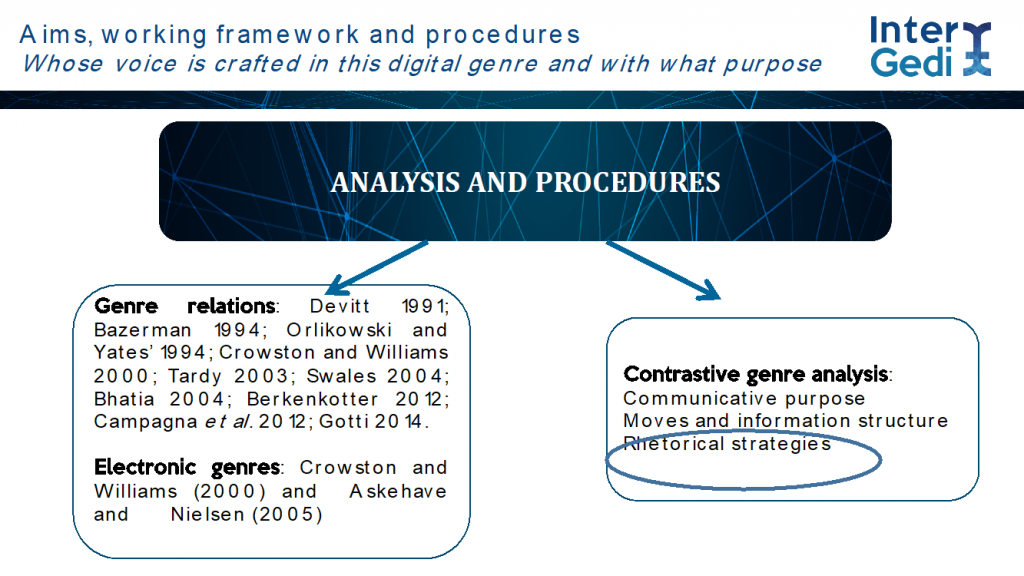 Herrando-Rodrigo, Isabel: “Who’s talking to me?: The construction of writers’ identity in digital academic genres”

Nowadays Internet has become the platform which everybody resorts to when suffering from a health problem. This urgent need to find out medical information (Herrando-Rodrigo, 2014) has led institutions and mass media publications to craft a new digital genre of expert / non-expert communication, without any previous agreement on either its rhetorical or discursive features. This genre, which I have labelled medical electronic popularizations (Med-E-Pops) and which is embedded in the medical colony, has been initially identified as a blurred genre with hybrid functions (Herrando-Rodrigo, 2012, and understood as a  reshaping and repurposing of medical research articles (Med-RAs),  in an attempt to facilitate understanding by a heterogeneous audience, the Internet community.

This paper aims to uncover the extent of Med-E-Pops writers’ (in)visibility (John, 2007) studying the use of abstract rhetors in their texts as a devoicing mechanism. Previous researchers concluded that the use of abstract rhetors in scientific dissemination articles explains the situation described in the Med-RAs as independent of human agency (Hyland 1998) by presenting data deprived from any epistemic judgement (Ferrari, 2003).  Hence, I will contrastively analyse the use of abstract rhetors in a comparable corpus of 40 Med-E-Pops and 40 Med-RAs. In particular, I will explore (1) the rhetorical distribution throughout the texts, (2) the semantic implications of each inanimate subject (Groom, 2000; Bondi, 2009), (3) their combination with active verbs (Downing and Locke 1992, (2006)) and (4) the linguistic choices that pre-modify these abstract rhetors (Bordet, 2013). This will allow me to reflect on whose voice is crafted in this digital genre and with what purpose. The application of a gradable cline of visibility (Lorés-Sanz, 2008) may cast light on to how research is popularised as a neutral fact apparently devoid of human to preserve the reader’s trust in the research process and in the Med-E-Pops genre itself, bringing their creators’ voice, Med-RAs writers’, to the fore.