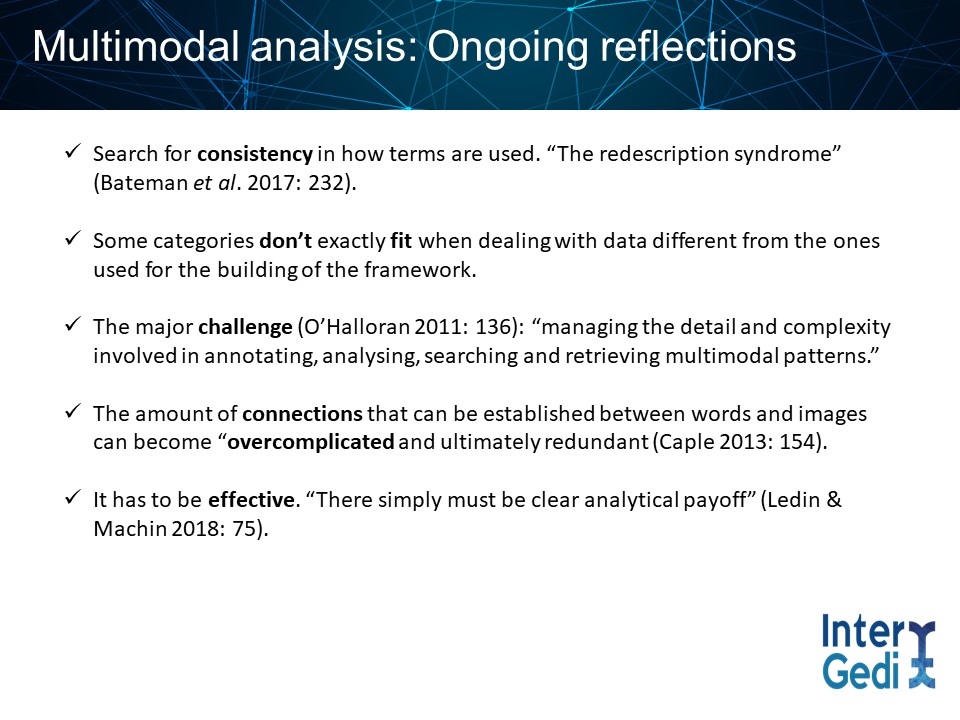 With her presentation, Isabel Corona finished off the thematic panel that InterGedi delivered at the CLAVIER2021 Conference. This time, she placed the focus on the hompages of the EUROPROwebs corpus and tried to illustrate how recurrent verbal and visual combinations were significant carriers of semantic and logical meaning within this genre. In order to do that, she drew in general on Systemic-Functional Multimodal Discourse Analysis and, in particular, on seminal previous studies undertaken by multimodal discourse analysts such as Bladry and Thibault, Stöckl, Kress and Leeuwen or Liu and O'Halloran.

Thus, she analysed the relationships of 85 combinations of words and images that were used in research project homepages to give visibility to the research groups and to foster the circulation of the project activities and updates. Interestingly, two main phenomena were identified as instances of ineffective practices in so doing: divergence and deviation-desconnection. Smarthpone photographs representing the team of academics and members making up the research group in charge of Horizon2020 projects were said to constitute a new lexical item with semantic and logical meaning that is prominent in this sort of websites, being of a multimodal nature.

Take the opportunity of finding out about the other communications in the InterGedi panel for CLAVIER 2021 here.

The full abstract of Isabel Corona's proposal can be consulted as follows:

The Rules for Participation (Regulation No 1290/2013) in the Horizon 2020 Programme for Research and Innovation, laid down by the Parliament and the Council of the European Union, established the beneficiaries’ obligations to disseminate the outcomes of the funded activities. According to this Regulation, ‘dissemination’ means “the public disclosure of the results by any appropriate means” (Title I, article 2 (8)). Naturally, the creation of a website is one of the recommended activities. Digital communication entails, among other demands, a visual construction of meanings, in this case for the dissemination of research outcomes.

Taking a social semiotic perspective, informed by Systemic-Functional Multimodal Discourse Analysis as the general theoretical foundation, this piece of research is focused on the multimodal construction of the news-and-events rhetorical cluster (Shriver 2013; Baldry and Thibault 2006; Stöckl 2017), one of the most pervasive sections of Horizon 2020 homepages. The study comprises a total of 85 words-image combinations and explores the semantic and logical ties created between both modes. It follows Kress and van Leeuwen’s (2006 [1996]) visual grammar for the analysis of images, and Royce’s (1998, 2007) Intersemiotic Complementarity framework and Liu and O´Halloran’s (2009) Intersemiotic Texture for the degree of cohesion established with their verbal texts. Results show that, although lack of cohesion is observed in some cases, there is a widespread use of the same type of images for the reporting of similar events, which indicates a ‘crystallisation’ of this text type, that is, a ‘multimodal collocation’, a natural combination emerged from this specific context of use.