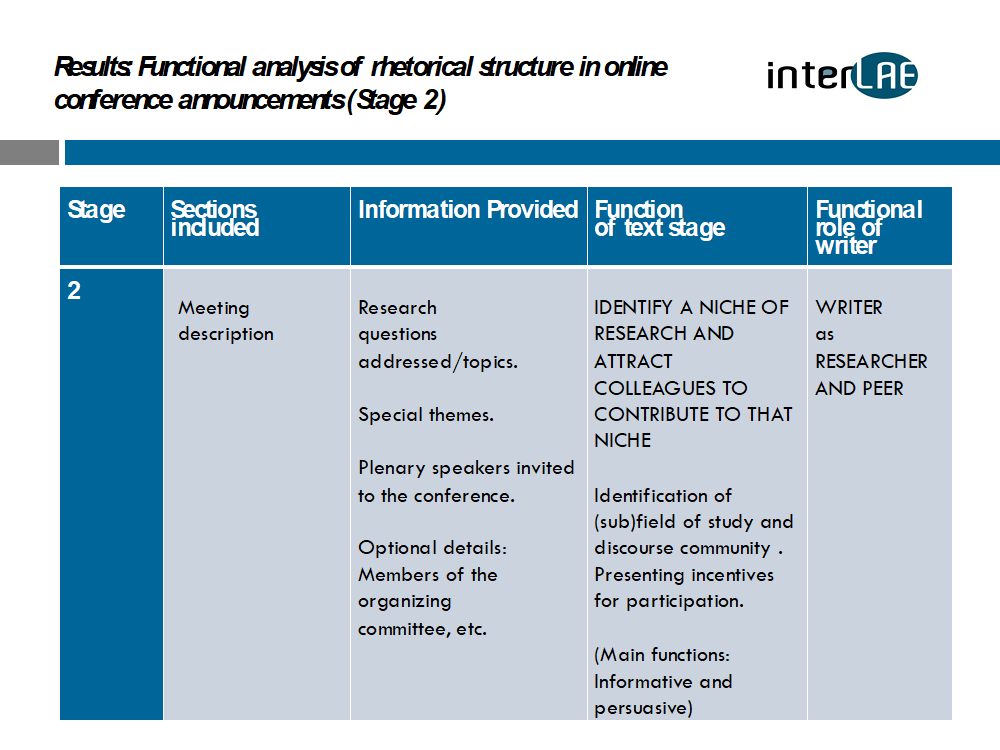 International academic interaction is nowadays mainly taking place on digital platforms. This is the case, for instance, with conference announcements, which are disseminated internationally through distribution lists. Online conference announcements, as discourse phenomena (Thurlow and Mroczek 2011), are sites for academic interaction among members of an international disciplinary virtual community (Herring 2004). The use of English as a common means of communication among speakers who do not usually share their L1 also makes these texts especially interesting for the exploration of English as a Lingua Franca (Jenkins, Cogo and Dewey 2011).

The aim of the present study is to explore the way online conference announcements become a space for international collective disciplinary interaction and how this interaction is realized linguistically through the use of English as a Lingua Franca (ELF). These online texts will be studied here following the methodological orientation proposed by traditional genre studies (Swales 1990, 2004; Bhatia 1993) and computer-mediated discourse analysis (CMDA) (Herring 2004, 2007, 2013; Thurlow and Mroczek 2011). The focus of analysis will be on rhetorical structure and the use of interpersonal markers and indicators of authorial voice (Cherry, 1998; Ivanič, 1998), such as self-mentions and engagement markers, as described in the literature on metadiscourse (see Breivega et al. 2002; Charles 1999; Hyland 2004, 2005a, 2005b; Vande Kopple 1985), as well as abstract rhetors, modal verbs and the use of active/passive voice.

For such purposes, a contrastive analysis of a corpus of 30 English conference announcements in the field of Linguistics organized in Anglophone countries and another corpus of 30 English announcements in the same discipline in non-Anglophone countries—all of themretrieved from The Linguist List—will be carried out both at the rhetorical and at the lexicogrammatical level. At the rhetorical level, the structure of the announcements in both subcorpora will be identified and described (Yang 2015). Moreover, the lexicogrammatical realizations mentioned above will be analyzed here as some of the linguistic resources which may be accounting for academic web-mediated interaction. Preliminary results show that, although differences at the rhetorical level are toned down as a result of the imposition of digital templates by the webserver, differences emerge to various degrees in the corpus under study at the lexicogrammatical level depending, among other pragmatic factors, on the role assumed by the organizers in the text. Moreover, the comparison of the two subcorpora under study may point towards spaces of intercultural communication and interaction, thus showing that the divide between native and non-native speakers of the language is not very helpful at the time of exploring international territories of communication and explaining how this communication is taking place on digital platforms. Thus, one main implication from these findings is the impact that the use of ELF in conference announcements may be having both for the fields of EAP and Intercultural Communication.