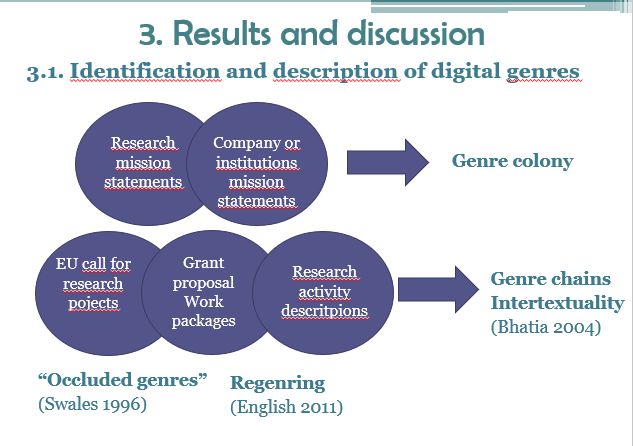 Academics’ discursive practices are becoming more and more varied and demanding as it seems to be increasingly necessary not only to get one’s research results published in English high-impact journals, but also to disseminate research outcomes globally. Such dissemination seeks to promote the visibility of the scholars and their work, so that they get to be known by a wider, international audience, including not only scientists in the same or different disciplinary field, but also stakeholders and beneficiaries from research and specialised knowledge. The common phrase “publish or perish” seems not to be enough and it should be taken a step further so that academics now need to “market (their research) or perish”. In this context, the websites of international projects are an important site to spread and publicise professional academic practices. The present research focuses on a genre-based analysis of a sample of 10 websites from European research projects within the H2020 program. The aim is to identify the digital genres which are hosted on such websites on the basis of the communicative purposes of the texts which instantiate such genres. These genres are understood to make scientific findings specialised knowledge visible and accessible to a wide, heterogeneous, international audience.

Specific digital genres in the sample of research project websites will be identified, labelled and analysed applying a “navigating mode” (focusing on the interplay between the web medium and the texts as generic instances, that is, bearing in mind the affordances of the web) and a “reading mode” (focusing on the specific structure and rhetorical strategies of the texts) (Askehave and Nielsen 2005). Also, specific genre relations among such genres as well as between those genres and other (non) digital ones will be established to better understand their purpose, their drafting and their exploitation.  A preliminary analysis will also be carried out of their rhetorical structure and salient lexico-grammatical features of some of the genres which are found to be recurrent in the corpus. This analysis of research project websites will allow us to gain an insight into current scholarly digital discursive practices in English, used as a lingua franca (e.g. Seidlhofer 2011; Mauranen 2012; Jenkins 2015), which play such an important role in making researchers and their work visible and accessible to a global virtual community.