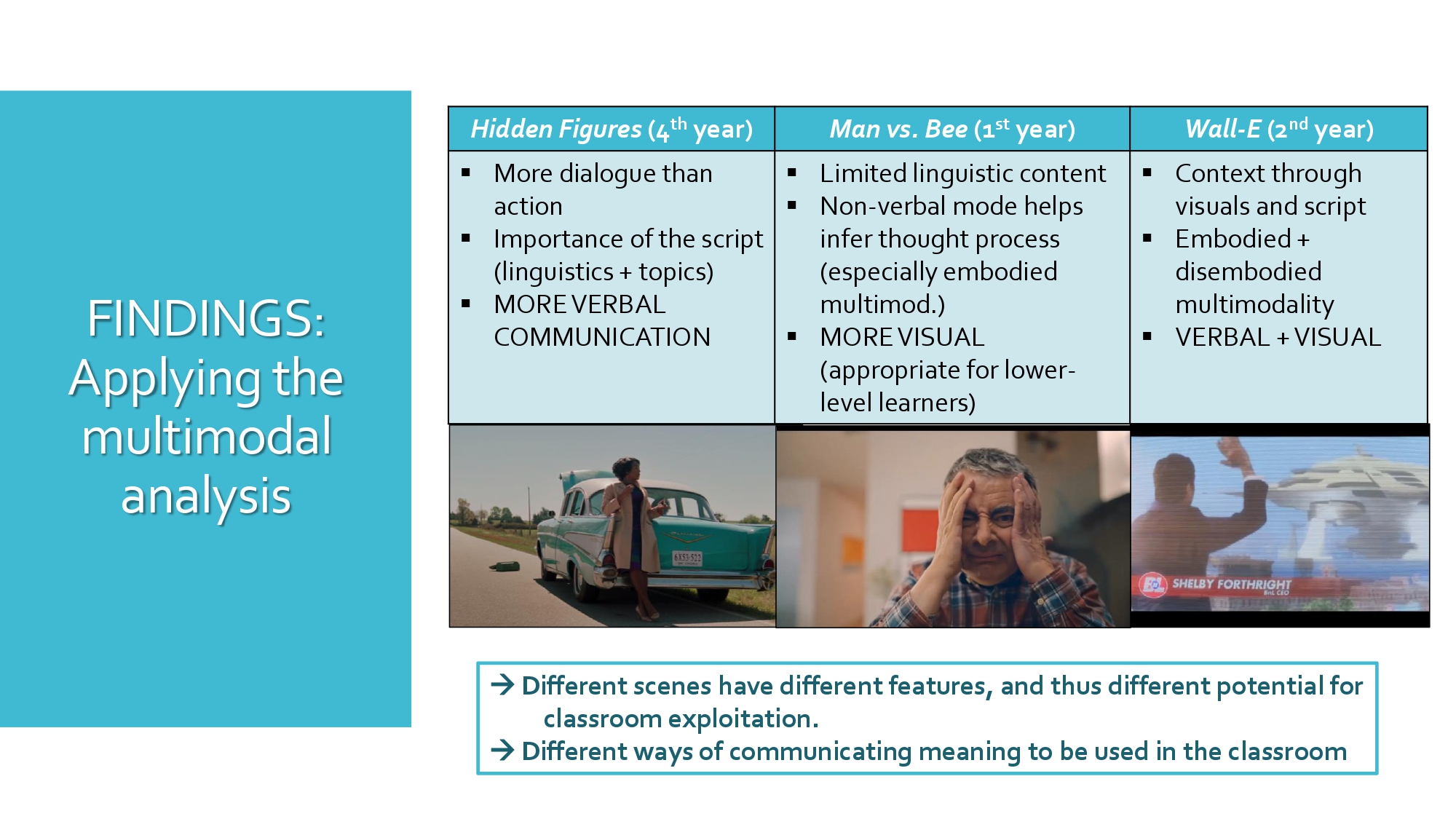 Paula Wood presented at the 36th edition of the Asociación de Jóvenes Lingüistas (AJL) conference, hosted by the University of Sevilla from the 21st to the 23rd of September 2022. In her presentation, titled “Multimodal discourse analysis of audiovisual materials for the EFL classroom”, she explained the process of compilation of her corpus of films and series CAMELLS and offered a comparison of the multimodal analysis of three titles to show how different modes work to communicate meaning in different ways and how this can promote students’ skills.

The full abstract of Paula Wood’s talk can be consulted as follows:

Multimodal discourse analysis of audiovisual materials for the EFL classroom

Nowadays, audiovisual materials such as films and series are commonly used in the classroom for foreign language teaching, because of their multiple benefits as a source of authentic input being used in realistic situations, because they cover a wide range of topics, and because visuality typically aids comprehension (Goldstein & Driver 2015). Working with appropriately chosen audiovisual materials can help foreign language learners develop a series of skills and competences (Donaghy 2019).

Films and series are multimodal ensembles that integrate a variety of modes – usually aural, visual, spatial, gestural and linguistic (Cazden et al. 1996). Taking into account that almost all one sees and hears in film has been previously planned to appear in the final result, it can be affirmed that most elements present in the film have the purpose of creating meaning, conveying messages and producing specific effects on viewers (Kress 2010). That is, media like films and series are communicative artefacts that usually entail a planned orchestration of modes, and by analysing them and determining what are more salient they can be exploited in the EFL classroom to develop students’ multimodal communicative competence (Bateman et al. 2017).

In this paper I will describe the compilation of my CAMELLS (Corpus of Audiovisual Materials for English Language Learning in Secondary) corpus, which encompasses films and series belonging to different genres, and illustrate how its multimodal discursive analysis is being undertaken. Such analysis will in the future inform the exploitation of such materials in the EFL Secondary Education classroom. Some preliminary findings on the most frequent modes and lexico-grammatical, discursive, pragmatic features within the verbal mode will be presented and discussed.