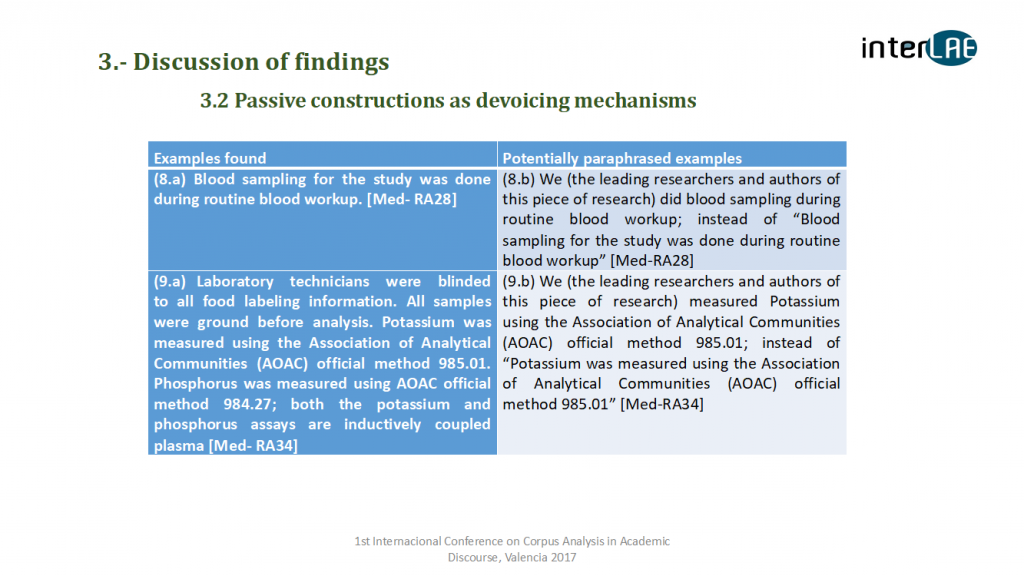 Herrando-Rodrigo, Isabel: “Authors’ visibility in medical discourse: is there a single framework of corpus analysis to fit it all?”

This study aims to contribute to the concept of writer’s visibility inspired by approaches to the analysis of identity in written discourse such as those taken by Ivanič (1998), Charles (1999) or John (2005), among others. The way medical academic writers self-represent themselves in their research articles, contributes to a gradable visibility crafted and constrained by the academic genre expectations these texts are ascribed (Swales & Feak, 2004; Matsuda & Tardy, 2007).

Traditionally, this visibility has been studied by the analysis of notions such as evaluation (Hunston & Thompson, 2000), authorial voice (Tang, 2004) or stance (Biber & Finegan, 2009). To the best of my knowledge, there is no a single framework that binds together all the textual realisations that can be considered as visibility traces. Visibility can be unveiled from different angles such as ethos, authorship, possession, etc. This study proposes a potential classification of lexico-grammatical realisations associated to the notion of voice being this voice the indicator of the writer’s presence in his or her text – a voice that seems to possess a process, ideas and knowledge.

This paper conducts a manual scan of 40 medical research articles compiled by this researcher that reveal different manifestations of the authors’ presence. From different frameworks of analysis available in Applied Linguistics (Functional Grammar, Evaluation, etc.) it could be concluded that lexico-grammatica realisations such as the passive voice, non-animated subjects followed by active voice or the use of reported speech can be interpreted as author’s voice realisations that allow us to measure or grade their presence in the text. A classification is proposed for the analysis of these realisations.