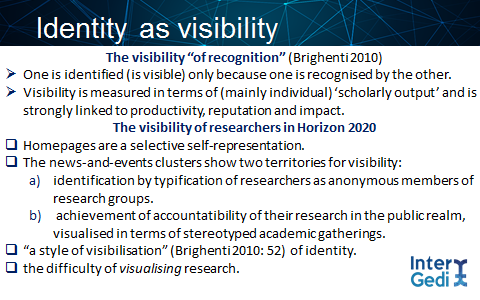 As part of a panel entitled “Analysing Scientific Digital Discourse: The case of research project websites in international contexts”, which took place at the 6th Asia-Pacific LSP & Professional Communication Association Conference organized by the City University of Hong Kong, Isabel Corona delivered a paper entitled “Understanding text and image relations in the construction of identity through genre: the case of European research projects’ homepages”, in which she took a multimodal perspective to explore how visibility and dissemination of scientific research are achieved through Horizon 2020 websites.

She explained how their homepages present a layout design where meaning is packaged into multimodal ‘rhetorical clusters’, and focused on the news & events cluster. She showed the types of visuals, and in particular the visual representation of social actors and the cohesive relations established with their verbal texts for the construction of identity. Her analysis demonstrated that researchers are absent as individuals – although she pointed out that some changes are visible in more recent updates of the websites–, and that there are obvious difficulties when trying to visualise research. She then invited us to think about the traditional construction of the news genre, which seemed to be at odds with what is considered as newsworthy in these homepages. This led her to a reflection on the role of context of use and purpose in genre change.

Full abstract and references of her contribution to the InterGedi2021 panel:

Understanding Text and Image Relations in the Construction of Identity Through Genre: The Case of European Research Projects’ Homepages

The digital evolution of scholarly communication has pushed forward important developments from a social as well as a technological perspective. It has expanded knowledge production and, at the same time, has increased access to information and knowledge. The technologisation of professional practices has created remarkable challenges within professional communities, not only in terms of scholarly impact, but also in relation to the need to forge a distinct identity through e-visibility (Lorés and Herrando-Rodrigo 2020).

The present study explores the multimodal construction of identity of researchers by focusing on the “news and events” section or “cluster” (Baldry and Thibault 2006; Schriver 2013) of 30 projects’ homepages of the European Research Programme Horizon 2020, from the EUROPRO web corpus compiled at the Universidad de Zaragoza by the InterGedi research group.

This research is informed by Systemic-Functional Multimodal Discourse Analysis as the general theoretical framework. It applies Kress and van Leeuwen’s (2006 [1996]) grammar of visual design, van Leeuwen’s  (2005) visual and verbal representation of social actors, and various classifications of the cohesive ties of the verbal and the visual (Royce 2002; Martinec and Salway 2005; Kong 2006; Unsworth 2007; Liu and O’Halloran 2009; Martinec 2013).

The differences shown in the analysis of this cluster with respect to the traditional construction of the news genre are reinforced by the insights provided by Bednarek and Caple’s (2017) taxonomy of news values. The analysis unveils that researchers’ identity is constructed by repurposing the news genre, and shows that in this case it is strongly influenced by its very context of use.  All in all, the aim of this study is to gain insight into the combination of semiotic resources, visual and verbal, to fulfil the research projects’ overall objective of increasing visibility of their work.